We are a motley crew of avid tabletop gamers who are eager to give something back to the hobby and the community by devising games, helping new game designers produce the best possible games, and sharing our thoughts and experiences about the processes and obstacles we have faced so far.

So, if you have a game idea keeping you up at night, if you find yourself adding cards or components to existing games and would like to find a place to expand upon and focus these thoughts then we would gladly welcome you into our group. Equally, if you are interested in playtesting new and unpublished board games, you’ll find lots to enjoy here.

We value the input (virtual or otherwise) of all members of the group equally regardless of race, ethnicity, gender, sexual orientation, disability, age or other protected characteristic. We expect our members to share this commitment and ask that they conduct themselves respectfully when engaging with the group.

I’ve been a tabletop game of one type or another since my early teens, starting with the obligatory Warhammer, and especially Warhammer Quest.  Matt Leacock’s Pandemic was “forced” upon after a dinner with some old friends and I’ve never looked back.  After amassing a sprawling and fairly diverse collection of mainly board games I turned my hand at Game Design in early 2017.

I founded this group, but only because Rob at the UK Expo said no-one was running anything for playtesters.co.uk in the Midlands. I’m an author of near-future SF and steampunk with a political novel on the way. I’ve been a Guest of Honour at a couple of SF conventions. One of my heroines is designing a game for the next book, so I thought I ought to invent something that actually works.

Games: This War Without an Enemy

I designed my first boardgame more than 30 years ago, an Asterix-themed version of Talisman, but I became more serious about game design around 10 years ago after discovering euro games and modern board wargames. My 2-player block wargame This War Without an Enemy is now available to pre-order from Nuts! Publishing. I am currently working on a 3-5 player historical game called Hungaria.

I’ve been designing board games since 2011, when I attempted to represent the entirety of Greek mythology in a single board game. Over the years I have learnt to love all aspects of the Tabletop world, and I am always excited by games with interesting themes which challenge the accepted “norms” of gaming. My favourite games include Dixit, Smallworld and Seven Wonders.

I’m a creative writer and musician with a game design habit. With two games successfully Kickstarted, and several more always simultaneously on the boil, I’m constantly looking for new ideas. Most of my games are basically confrontational and card or dice based. I’m in this for the laughs and the community around the table.

I am an average guy, have a family and a full time job and I enjoy normal things such as

playing games and hanging out with friends, maybe with a beer once in a while. I enjoy looking after and spending time with my family and enjoying the odd film at the cinema when I get time. I have always had a big imagination and some time ago, I thought it would be a great idea to share my imagination in a fun way for other people than myself to enjoy and this has come out in the form of games. I would be so pleased if down the line, I stumble across someone playing one of my games in a café or talking about them online. If I bring half as much enjoyment to people playing them as I have creating the games then I would be absolutely chuffed. Always happy to talk and discuss new ideas and welcome challenges and I look forward to hopefully being more involved with the Board Game community in any way that I can.

Simon designs board games for Dranda Games. He has been designing games since 2007, but they didn’t get very good until about 2015. When he’s not designing board games (or playing them) he enjoys martial arts (as a jiu-jitsu instructor), films, video games, and reading. Simon received a lifetime achievement award when he graduated university and, although he was honoured, it has led to multiple midlife crises.

My love for games goes right back to playing cribbage with my Dad. I cannot remember when I started designing but I do have the rules I wrote for a global travel game from when I was in my late teens. Game design got real when I committed to making Niche in aid of Conductive Education. When you say you’ll make something for charity you feel compelled to do it, regardless of how scary it is. Since then I have made several games including Mijnlieff and Zoom Zoom Kaboom which both won awards and I’ve been a regular exhibitor at the UK Games Expo since 2010.

Ayden is an individual who hates to party and would much rather pull an all-nighter to play some board games with some close friends. Ayden was a late bloomer and did not start playing board games until he was in his early 20s. This was because Ayden’s mom hated board games. Ayden’s mom was wrong (don’t tell her he said that). When Ayden is not playing games, he is either designing board games, playing computer games, or watching junk on TV with his lovely wife. Ayden’s dream job is retirement.

I’ve been a gamer since I was a child, starting with games such as Heroquest and Space Crusade. Before long I was playing Cyberpunk 2020, Battletech, Squad Leader, Car Wars and Warhammer 40,000. I’ve played a wide variety of games of all types. I favour challenging strategic games with a strong theme. I made my first prototype when I was 14 and still have it. I decided to make Adversity Games in 2014 while I was first developing Nightlancer. I do it to have fun and make awesome games. 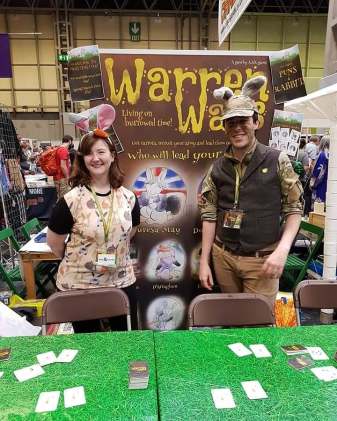 ASK games are a husband and wife team. They became interested in game design after attending a Birmingham Boardgame Bash event. Their first game, Warren Wars, was successfully Kickstarted in 2019.

My name’s Danny and I’m a very avid game of both the video and tabletop kind. I got into making games in 2017 when I started matching rules from certain games and put together rule sets with the best bits from a wide spread of games across many genres, and I love doing it!

Games: Brawlings, Crossbones, Fox on the Run, Waddle Waddle, Xibalba, Duty of Mine

I’ve been designing and playing games for my whole life. Since I was a kid, I enjoyed creating adventures to play with my friends. I also study game history, as I think games have always been an incredibly important cultural element, that changes and evolves with society. I’ve created StarSeeker Games in 2019 to group all my projects under one name. I try to jump from one genre to another when I design and play games, to learn as much as possible about the colourful (and sometimes strange) world of game design.