There are few things harder than compressing the entirety of human history into a video game, and one of them is compressing it into a board game. An example of this is A New Dawn, the latest board game adaptation of the epic Civilization series. In order to meet the Ultimate Challenge, the designers had made sacrifices: retaining the video game’s random world generation had come at the expense (in my opinion) of any interaction with sea tiles. I was disappointed with the absence of naval combat, but how would I have included it alongside a modular board? 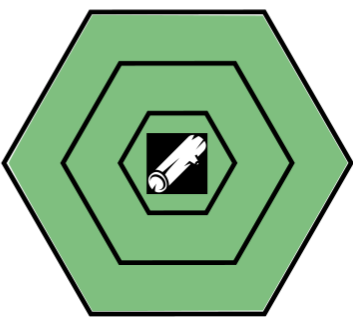 I decided to make the tiles of the modular board as simple as possible: a single hexagon providing a given resource (wood, oil etc.). I used concentric hexagons to further divide the tile into three “tiers” – controlling all three would be necessary to gain the resource. Investing in new resources would slow down a player’s exploration of the board, represented by flipping tiles over. The modular board would, coincidentally, resemble Catan’s.

Next, I needed a single mechanic to simulate nations’ military, scientific and cultural advances. I turned to deck building (hold cards, play cards, draw better cards, repeat) and gave players the Hunting (for movement) and Gathering (for recruiting troops) cards at the start of the game. Instead of playing cards, they could “scoop” all of their played cards back into their hand and choose a new one (representing a scientific advance). Their combat strength, however, would be tied to the number of cards they played before scooping – military and scientific advances would, therefore, be mutually exclusive. Cultural advances would be made by “building” cards to make them permanent – Wonder cards would score the most victory points (VPs).

I had mechanics, but did I have a game? I needed a certain kind of person to help me answer that – luckily, I knew where to find them (scroll to the top of the page and you will too). I sat down with five experienced playtesters (two of them game designers) for a three-player tussle. My team drew the Swords and Slings cards, allowing us to make two attack actions before scooping. Our neighbour drew and built lots of Wonder cards – war was inevitable, since capturing cities was another source of VPs. This highlighted some issues with the combat system: the “scoop and loop” effect trapped the defender on the back foot. They still managed to tie for first place, and we had a lengthy (and completely unbiased) discussion of suitable tie breaks, eventually awarding victory to the player with the most resources.

It was a fun experience and the deck (or, more accurately, hand) building seemed to work, not least because it kept turns short and sweet. One of the main suggestions during my debrief was to tie each resource to a part of the technology tree:

Finishing this project would, however, require years of playtesting: I need at least three “era” decks, and haven’t worked out naval combat yet. The game seems to have the potential to meet the Ultimate Challenge, provided I’m willing to write religion, politics, espionage, unrest, barbarians, literature and more out of history. We all have to make sacrifices, but I’m keen to at least keep nuclear weapons: I want the game, and the world, to end when the first is launched.

Have you got a favourite game which tackles the Ultimate Challenge, or any comments on this one? Please leave a reply!

2 thoughts on “The Ultimate Challenge”